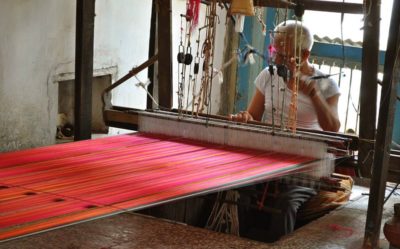 The magic of Mashru- Then & Now

Gujarat is the land of kaleidoscope of embroideries and fabrics, and it is from here that Mashru comes. The fabric that glistens like silk and has the soothing comfort of cotton, comes with a rich history. Originated in the 19th century, Mashru literally means “permitted” in Arabic and “mixed” in Sanskrit.

Historically, Mashru ﬁnds its origins in West Asia. The Muslim community is attributed to inventing the fabric and popularizing its use. Silk was banned in the religion since it was made by killing of silkworms. This lead to the invention of Mashru, a fabric which glistened in the brilliance of silk and comforted as cotton. The inner fabric, in touch with the skin, was made of cotton. And the outer layer was made of silk. From Turkey to many Mediterranean countries, Mashru impressed without breaking any religious laws. Its movement into the Hindu community happened through the nomadic tribes of Kutch. Now the fabric is mainly manufactured in Patan and Mandvi in Gujarat. Even its weaving has evolved over the time and had its unique regional inﬂuences. Silk is used in the vertical yarn and the cotton is used in the horizontal yarn, and this craft is a result of ancestral teachings. The intriguing & novel weave technique results in a fabric that makes Mashru more durable.

Mashru was also coined as the affordable silk and used by the lower economic class as they could not afford pure silk. But now, the scenario is different. The fabric is extensively used in Lehengas and is a popular trousseau fabric choice. Silk is also replaced by Rayon in some cases to maintain the sheen, but make it more durable. However, the use of artiﬁcial dyes defeats the purpose. This method of making Mashru is primarily practiced in Patan. Mashru also comes in a host of bright colour palette which perhaps comes from the contrast the land of its origin exhibits. It is believed that due to the barren lands of Gujarat, the weavers are inspired to create bright weaves that reﬂect their spirit. Striped or Ikat patterns make the fabric even more unique, bringing out the opulence of silk perfectly. However, dotted patterns of Mashru exist in regions such as Anjar, but the popular pattern is the striped one.

Suraiya Apa has spent most of her octogenarian life in reviving Persian fabrics such as Mashru (among others). She is one of the most respected entrepreneurs working towards the revival of beautiful fabrics and maintain their use as contemporary designs. Having worked with the likes of CK, Pierre Cardin and Gucci, she now spends her life in a unit 40kms outside of Hyderabad working with weavers. She shares, “Every weave tells a different story. Mashru & Himroo, a fabric made by interlacing cotton and silk, is one of the most vibrant fabrics & have always been luxurious fabrics. Although from Aurangabad, the Persian arts became almost obsolete post partition.” The sheen of Mashru shines through ages of usage. Its purpose of invention may differ from what it has become now, but not its brilliance. India is home to hundreds of unique fabrics and crafts, each with its own techniques, motifs and countenance. They deserve to be re-discovered, celebrated and preserved.