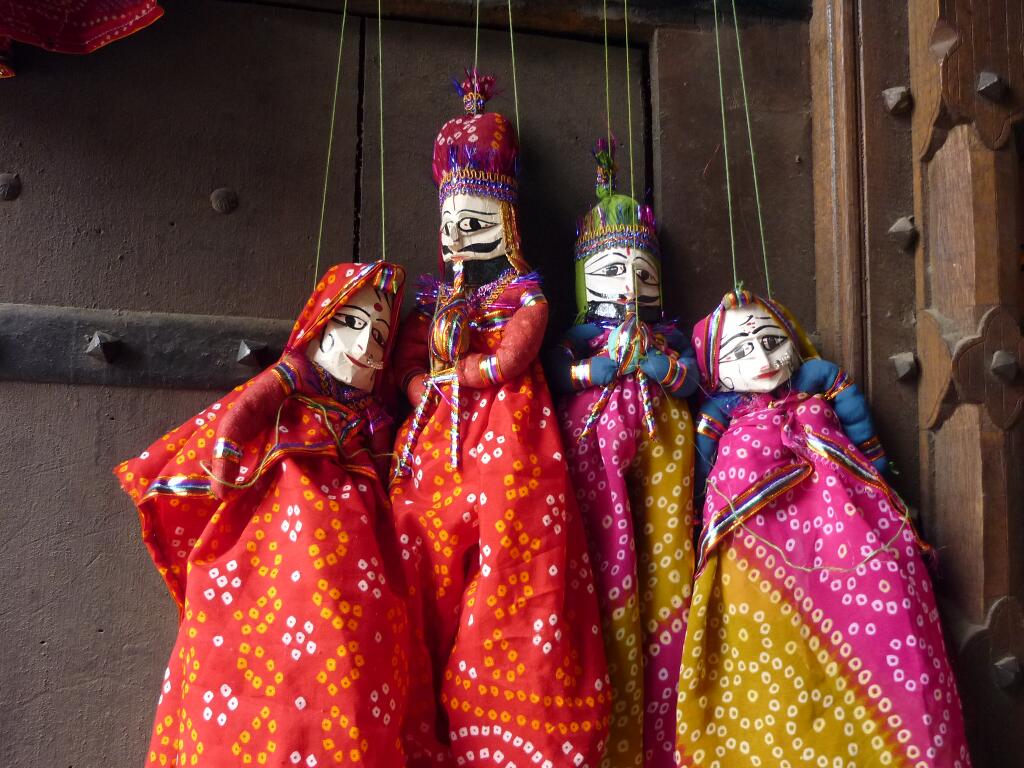 The Art of Puppetry

A puppet is one of the most remarkable and ingenious inventions of the man. It has been said that a puppet has to be more than his live counterpart for it is definitely the suggestive element that is more captivating and enduring in a puppet.

Ancient Hindu philosophers have paid the greatest tribute to puppeteers. They have likened God Almighty to a puppeteer and the entire universe to a puppet stage. Srimad Bhagvad Gita, the great epic depicting the story of Lord Krishna in his childhood say that with three strings – Satta, Raja and Tama, the God manipulates each object in the universe as a marionette.

” Without culture and the relative freedom it implies, society, even when perfect, is but a jungle. This is why an authentic freedom is a gift to the future.”

Puppetry throughout the ages has held an important place in traditional entertainment. Like traditional theatre, themes for puppet theatre are mostly based on epics and legends. Puppets from different parts of the country have their own identity. Regional styles of painting and sculptures are reflected in them.

” Culture is the habit of being pleased with the best and knowing why. “

Viewing colorful wooden dolls with bountiful eyes and expressions , swaying with the rhythm as they twist and twirl with their delightful Rajasthani outfits on, while the puppeteers work wonders with the strings never fail to leave the viewers awestruck. The tradtional art of puppets has stood the test of time and has been entertaining the Kings and nobles since times immemorial. Rajasthani kings were patrons of Art and Craft and they encouraged the craftsmen in activities ranging from wood and marble carving to weaving pottery and paintings.

Kathputli is a blend of two Rajasthani language words Kath meaning wood and Putli meaning a doll which has no life . Kathputli means a puppet which is made entirely from wood. It is a string puppet theatre , native to Rajasthan , India and is the most popular form of Indian puppetry. Being a string marionette, it is controlled by a single string that passes from the top of the puppet over the puppeteers. It is created with wood and fabric. 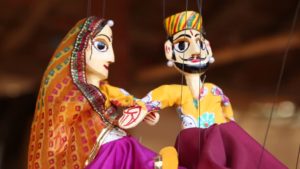 The process of making puppet is very intricate and involves a lot of patience. The process is conducted by both men and women. In Jaipur the puppets made are of small size; with wooden heads, decorated with cloths and stuffed with chaan or cotton.The wooden faces of these puppets are colored as per the characters they play in a specific enactment. Painted in yellow shade with their hands loaded down with clothes, cotton and fabric pieces, they wear delightful Rajasthani outfits.

Heavy embellishment is done on the puppets which are meant for performance. They are decorated with handmade jewelry, instruments etc. to make them appear lively. These puppets are mainly sold as souvenirs and for this reason the female puppets have traditional gorla on their foreheads while the males have beens (Snake Charmers Flute) which depict the culture of Rajasthan.

Rejoiced in voluptuous and regal splendor throughout its history, walking through luxurious colors, earthly rich materials and showcasing a flamboyant flair divulged in culture and manner, India is a land of kings and emperors. It is the nation whose columns of history is crowded with thousands of monarchs, their majesties and graciousness, serenity and royal highness’s, but this influential past bought with itself the great responsibility of keeping these tales alive.

10 books that bring forward the glory of art and crafts
The life and adventures of Kashmiri Kaleen
Padharo Mhaare Des : 10 Things you must know about Bandhej
Arts 13 Culture 10 Newsletter 7 Technique 4