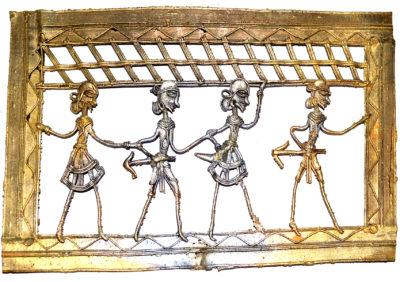 In the tiny huts located near the dusty by lanes of a nondescript village of Chhattisgarh, by the light of the earthen lamps and amidst the clay moulds, coils and metal pieces is a brass sculpture in the making. The sculptor is hovering over his lamp and steadily building a religious image using a very popular technique known as Dhokra.

Who would have imagined that fusing metal and wax would go on to create such wonderful and beautiful art sculptures?  The traditional Indian culture is so rich but these crafts have been forgotten. It would be surprising to know that crafts such as Dhokra are very popular in the west and are just gaining credibility here in India, where it all started. 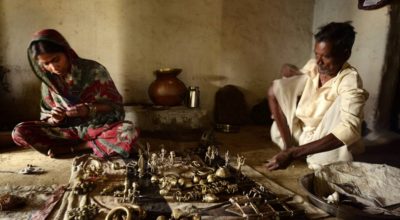 Our nation has a rich history of arts associated with it for hundreds of years. Dhokra is one such art.  Dhokra is actually, a tribe of metal smiths of West Bengal. The tribes, who are, incidentally still nomads with few settlements that now extend from Jharkhand to West Bengal and Orissa to Chattisgarh. A few hundred years ago the Dhokras of Central and Eastern India traveled to southern India as far as Kerala and to north as far as Rajasthan and hence are now found all over India. Their technique of lost wax casting is named after their tribe, hence Dhokra metal casting. Dhokra can be explained as a non–ferrous metal casting using the lost-wax casting technique. This art of metal casting has been prevalent in India for almost 4,000 years.

The artisans displayed their skills in making bronze and brass objects using the casting technique. A clay model forms the core and wax threads are wrapped around it to form a layer. This is covered with another layer of clay with a small aperture. Molten bronze or brass is poured in, which melts the wax, replacing it with brass or bronze. The fact that it enjoys its popularity even today speaks volumes about the craft.  One of the earliest discoveries of this art form was the “dancing girl” of Mohenjo-daro. 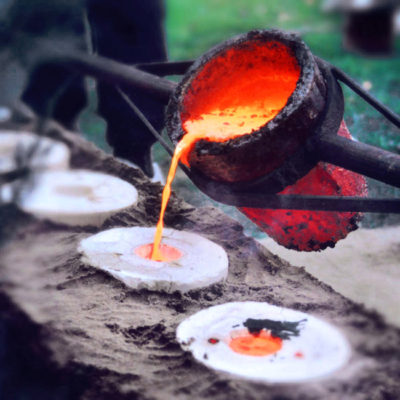 The art of metal casting

Dhokra products enjoy tremendous popularity in the domestic as well as foreign markets because of their simplicity, enchanting sculptures and form. Popular products from this craft are cutlery, horses, elephants, peacocks, owls, religious images, bowls, spoons, lamp caskets etc. Crafts made by following the Dhokra method, can be as small as a bead of a centimeter diameter or as large as a  5 feet tall statue of a mythical animal or even deities. Larger pieces which involve extensive usage of metal and wax are made by a very few master craftsmen. 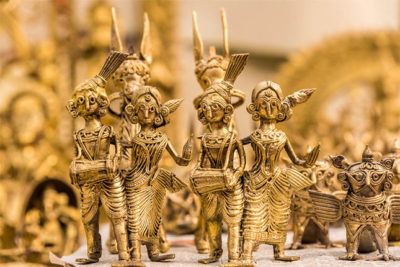 The products of the Dhokra art

Our cherished maker partner, Bhalu Monde who is an art and photography enthusiast and studied from the Central St. Martins University, London has now immersed himself in the art for the past 20 years. Bastar Belmetal Cutlery and Products is the brainchild of the 75-year old Bhalu Monde and his college mate  from his university days and friend, Mr. John Doubleday,.  The name Bastar is another name for Dhokra. The enterprise sells knives, spoons, forks, serving spoons which are made using the Bastar technique.  Sometimes, they have clients who bring them traditional spoons, which were owned by their ancestors, and ask for a recoating on these spoons using the Bastar technique. Mr. John Doubleday, a partner of Bastar Belmetal Cutlery and Products, is also an accomplished artist who has worked closely to help in the installation of the Nelson Mandela and the Charlie Chaplin busts in Leicester square.  Bhalu Monde proudly says that John was surprised at the kind of techniques followed by the Bastar artists. Bhalu has been a collector of Dhokra inspired craft products for quite some time. He, in fact, has installations of sculpts that weigh almost 15-20 kg in his private collection. Seeing the lack of guidance and also fearing that the art would be lost forever, Bhalu gradually started meeting artisans and sculptors to understand their wants and needs and established his firm.

To create more contemporary Dhokra figures, there are artist who go for walks in the forest, gather fallen branches, flowers, leaves: anything which looks sturdy enough to be cast. Innovation in the form of fusion is also taking place. Various forms of fusion like: brass and bamboo, brass and iron, and finally brass and rock are being used.  This fusion between rock and brass, using the lost wax process, is what has been christened rock dhokra. The technique was extremely difficult to achieve, and it is in the process of being patented .

The first rock dhokra sculpture was a nature goddess, her curved back fused with brass to the rock on which she lay, her wild hair overflowing in gold strands. Those familiar with dhokra know that it spreads from Bengal to Orissa, is popular in Chhattisgarh and Jharkhand, and has been practiced for centuries, producing figures of gods and heroes.

In the contemporary art world, people will remember the sculptures that Meera Mukherjee made using the same painstaking process: a mould of beeswax is covered with two layers of clay with paths left open for the molten metal to flow in and the melted wax to flow out. Deeply influenced by the Dhokra technique of Bastar in Madhya Pradesh, Meera Mukerjee perfected a technique in bronze that was unique. 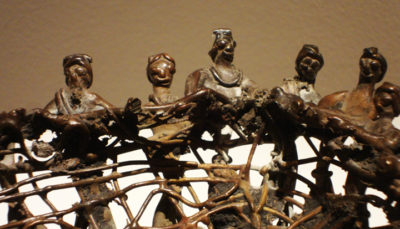 For the craftsmen, to begin imagining crude pieces of rock as a bird or a goddess or a dancer were perhaps the biggest challenge of all. But this is also what made the new form attractive: the potential connection of every element in the sculpture to the mythological, material and imaginative life of the sculptor.

Ad men-designers-curators Parixit Bhattacharya  and Ankur Rander say “We are looking at the Dhokra handicrafts of Bastar. The ancient wax casting technique is dying and no one has come up with any tech to save it,” says Bhattacharya, explaining that they are thinking along the lines of creating a product that will connect two people through a shared experience (facilitated through the push of a button, perhaps).

The current market situation does not support this art greatly. The present generation does not understand the value of this art in itself.  A majority of demands are for sculptures of the statues of Lord Ganesh and Gandhiji. There is a demand for small things like door knobs and the likes, but Dhokra artisans are of the opinion that these articles would not survive in the long run. The lack of business guidance and market techniques prevent new artisans from getting involved in the craft. At Direct Create, we are providing a better platform for the appreciation and the pride that the craft deserves. The craftsmen will also reach a wider market which will lead to a degree of financial prosperity and change their way of living and working.

May long live the Dhokra art !