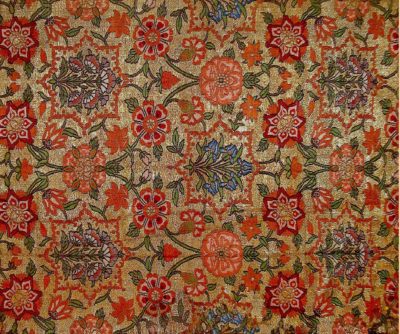 The life and adventures of Kashmiri Kaleen

My name is Kaleen and I am a carpet. But I am no ordinary carpet — I am as intricate as Mathematics, as beautiful as the men who weave me. I am a hand knotted silk, sometimes fine wool carpet woven on a vertical loom through a process of wrapping a supplementary weft around successive warps. While my main use is for floor matting, people sometimes use me as a prayer rug, wall hanging or other purposes.

Kashmir is a place that has been known for its rich art and craft since times immemorial. But my origin does not lie in Kashmir. My family’s legacy goes back in time and can be traced back to the Persian carpet tradition. We travelled to India with emperor Zain-Ul-Abadin during his rule. Another belief is that we were brought to India by the revered Sufi saint Mir Syed Ali Hamadani from Hamadan in Persia. Regardless of our origins, we have found a special place in Kashmir’s deep rooted tradition of art and craft. 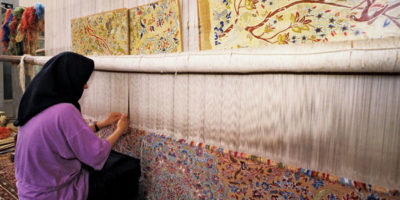 Over time, my brothers and sisters have undergone several changes and acquired a local Kashmiri flavor. Some of us are designed based on the indigenous flora and fauna, others include motifs like elephant combat, Gaja-Simha or the half elephant-half lion, tiny blossoms, fruit clusters, the Persian Chahar Bagh or Garden of Paradise, warriors on horseback, and even the lovers Laila-Majnu.

What is most fascinating, however, is how we are made, for the process is even more beautiful than the end product we become. This age old tradition has been passed down from generation to generation, from master to apprentice, which is known as the Ustaad-Shagird. At one point of time, the weaving skills would be taught at the early age of six, although with today’s ban on child labor, this age has increased for the best. Most of our makers are not conventionally educated, but the skill set and knowledge of carpet weaving that they possess, will be unmatched for generations to come. Most of them remain weavers for their entire lives, working diligently to create woven magic, fending for their families and sustaining themselves off the craft.

Understandably, the craft itself is detailed, laborious and so exquisite that us Kaleen carpets have become among the most expensive pieces of handicraft, with the price determined by the size and pattern. The passion and hard work of local artisans along with a sense of artistic, poetic, historic and cultural responsibility that can be seen in each handcrafted carpet, continues to amaze tourists who witness the craft

A proud symbol of Kashmiri handicrafts for ages, the weaving skill begins with the artists spending close to a month to draw the mesmerizing designs and patterns on paper. This design is then converted into a weaver’s language called the Talim, a pattern chart that plots the number of knots that needs to be woven of the same color, which is sung aloud. An example of this is: “Chour deeath, zee anaar, threa makia, brounth kum paknaw, (4 white, 2 maroon, 3 lemon-move them to the front); akh deeath, threa sabaz, zee makai path kun paknaw, (one white, 3 green, 2 lemon-move them back)”. Finally, the Kael Baafs (Kaleen weavers) craft this delicate mixture of silk and thread onto the fabric.

Talim is the written code, the carpet language that the weavers later follow while making the carpet

Now, let me assure you, that this is not an easy job. For it takes several makers with different skill sets to work for months, even years to produce a single Kaleen carpet, a sought after piece of art.

While carpet weaving is generating employment for artisans and playing a pivotal role for the tourism industry, both regionally and worldwide, the future of us Kaleen carpets is a little uncertain. For starters, there’s a big career shift in play, with the younger generations of most carpet weavers choosing other profitable businesses instead of pursuing the craft.

The good news is that enough efforts are being made to develop the craft and keep it alive, especially considering the high quality craftsmanship, attractive designs and utility element of the carpets. There’s the government’s move to set up Indian Institute of Carpet Technology, universities offering diploma and certificate courses on carpet weaving, digitizing the art, enabling artisans to use technology as a tool and using e-commerce for setting up a much-needed platform for the artisans. For now, I’ll keep my fingers knotted.

Help me keep my unique heritage alive, and not be lost to the wave of modernisation. This is a sincere plea.

You can find me and support the craft at Direct Create!

Meet the artisan – The backstory of Miniature Painting
Lac Art of Rajasthan
Top painting pioneers of India every art enthusiast must know about.
Arts 13